The Necessity of Hyperbole in Postmodernity

In Chronoschisms Heise discusses the “urge on all sides of the political and theoretical spectrum to declare conventional and high-modernist modes of reasoning about time inadequate and outdated. In some cases, this urge expresses itself in a clear tendency toward the hyperbolic” (30). Heise argues the relevancy of bypassing complicated theoretical paradoxes of temporality in favor of metaphors, such as “Jameson’s association of the postmodern time sense with schizophrenia…[, as] the new temporal realities do not seem to fit readily into the vocabulary that non-technical language puts at the writer’s disposal” (31).

Writers that experiment with language as it pertains to constructions of identity and meaning, such as constructionists (Barthes, Saussure, Strauss) and deconstructionists (Derrida, Spivak, Bhabha, Butler) either must use the existing lexicon available to them (and the world at large) or coin terms, such as differance, essentialism, mimicry and mockery, etc. The poststructuralist’s manner of critiquing the ways in which humankind constructs meaning through language is similar to the methods that postmodern authors construct their text—through the use of hyperbole, used in this sense to mean magnification rather than a gross over-exaggeration.
Heise’s view of hyperbolic representations of temporality gave me new perspective on postmodern narratives. Extravagant metaphorical representations used to encourage critical thinking illustrate the hyperbolic nature of postmodern texts: Octavia Butler’s emphasis (in Kindred) on the psychological implications of traveling to (and interfering with) a historically turbulent and personal moment of time, rather than the theory of time travel itself; Margaret Piercy’s ambitiously didactic exploration of a future in Woman on the Edge of Time, mysteriously tapped into by an imaginative and overwrought young woman, wherein gender, sexuality, and race are no longer subject to binary oppositions; Toni Morrison’s use of parallel timeframes, her rhythmic  depiction of the collective search for African American self-identity (rooted in the past), and the necessity of love and forgiveness in Jazz; Julia Alvarez’ use of reverse chronology and the fragmentation that occurs when one is psychologically torn between cultures in How the Garcia Girls Lost their Accents; and Kate Atkinson’s Life After Life, which “plays” with the notion of eternal recurrence.

Kate Atkinson notably includes an epigraph from Nietzsche’s TheGay Science, which analyzes the human reaction to the possibility of eternal recurrence—Dread or Acceptance. The way Atkinson constructs her novel reflects postmodernity’s frequent discussions not only about the nature of time, but the place of humankind within a cyclical system of temporality wherein we have the power (if only we could tap into it) to change (or simply to delay) the future. 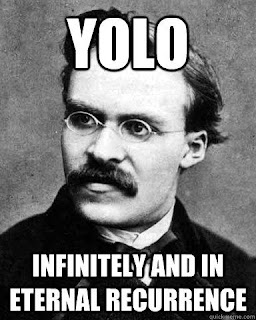 In order to accomplish the feat of writing a novel, treatise, script, etc., that artistically questions the nature of temporal reality—or any other topic that clashes with the senses—as we know it, the use of hyperbole is a necessity. People that think of themselves as rational, logical, and literal may scoff at notions of eternal recurrence and classifications such as posthistory, poststructuralism, deconstructionism, and postmodernism, and yet there seems to be no manner of straightforward analysis that aids our understanding or our ability to cope with the complexities of the world in which we live.

The common (mis)interpretation of Occam’s razor today, that the simplest answer is most often correct, has always struck me as false. Avoiding needlessly complicating issues by relying upon preconceived notions, irrelevant assumptions, and post hoc fallacies makes perfect sense, but claiming that in simplicity lies Truth is borderline delusional. In order to make sense of the world and our subjective place within it, time must inevitably be pondered, and by utilizing hyperbolic techniques that emphasize (yet paradoxically help to explain) essential enigmas, authors help to aid in the process of awareness on a grand scale.
Posted by Ben Cravens at 4:19 PM