Mysteriously transported back in time, Dana becomes immersed in orality, now divorced from the pervasive barrage of information characteristic of modernity.  Despite Walter Benjamin’s disparaging remarks about novels, Octavia Butler's Kindred sheds light on the importance not only of remembering the past, but living it, of chronicling a first-person narrative involving a descendant of slavery plunged back into the oppressive world of her ancestors.

Walter Benjamin’s “The Storyteller” discusses the inexpressible nature of experience in the modern world.  According to Benjamin, the rise of telecommunications during and after WWI, which dispensed massive amounts of information, the relevance of which only lasts for a short time (at least in peoples’ memory), robs us of communicable experience.  The massive (and gradual) shift from the world of shared experience to a world increasingly fast-paced and fragmented shook the foundations of useful information, which stories are intended to supply: “The usefulness [of a story] may, in one case, consist in a moral; in another, in some practical advice; in a third, in a proverb or maxim” (86).  Regarding the rapid production of information in the modern world, Maria Poplova explains, “We live in a world awash with information, but we seem to face a growing scarcity of wisdom. And what’s worse, we confuse the two. We believe that having access to more information produces more knowledge, which results in more wisdom. But, if anything, the opposite is true — more and more information without the proper context and interpretation only muddles our understanding of the world rather than enriching it.”

Benjamin claims, “the birthplace of the novel is the solitary individual, who is no longer able to express himself by giving examples of his most important concerns, is himself uncounseled, and cannot counsel others” (87).  For Benjamin, a storyteller is one who provides “counsel for his readers…[which] is less an answer to a question than a proposal concerning the continuation of a story which is just unfolding” (86).  In other words, wisdom—“the epic side of truth”—is increasingly being supplanted by the age of information.  As a storyteller, Butler does provide us with useful information, perhaps not a concrete moral that we place upon a banner, but certainly the advice of never forgetting where we come from, how the past never truly dies, and how the oral traditions of her ancestors thrive today because of her gift of writing.

Has Butler no counsel as a novelist? Was her grandmother not a slave who orally related her experiences of slavery to her granddaughter?  Butler does not seek to answer any concrete questions; rather, Kindred prompts readers to consider how relevant slavery continues to be in our everyday lives, and to question the agency of individuals caught in an evil cultural charade of exploitative dominance, both victim and perpetrator alike: “I never realized how easily people could be trained to accept slavery” (101).  Rather than attempting to inform her audience about the theoretical mechanics of time travel, Butler instead counsels her readers by focusing on the psychological implications of a widely accepted form of cultural evil (just as many people today accept the massive incarceration rate of African American males).  She forces the reader to step back in time and witness both the cruelty and humanity of those entangled in the snares of chattel slavery.
Regarding the necessity of looking to the past, Seneca once said, “By the toil of others we are led into the presence of things which have been brought from darkness into light. We are excluded from no age, but we have access to them all; and if we are prepared in loftiness of mind to pass beyond the narrow confines of human weakness, there is a long period of time through which we can roam.”
The conundrums of the past can and should be confronted using the art of objective remembrance.

In preparation for living in the antebellum South, Dana reports reading “everything…in [her] house that was even distantly related [to slavery]—even Gone with the Wind, or part of it. But its version of happy darkies in tender loving bondage was more than I could stand” (116).  Dana’s frustration with Gone with the Wind illustrate humankind’s tendency to justify the horrors of the past.  The magnolia myth continues to darken the past by presenting the antebellum south as a golden age, wherein white “gentleman” reigned supreme and ladies and slaves (and anyone who wasn’t white) happily knew and stayed in their place.

Because “the toil of others” (in America, slave labor) leads humankind into the present, which is an amalgamation of prior social, cultural, and economic realities, we must never allow ourselves to justify the horrors of the past.  Storytelling provides us with the means to explore and relate to the raw experiences of the past without attempting to solve the riddles of history. A novelist can indeed council the reader via “a proposal concerning the continuation of a story which is just unfolding” (Benjamin 86).  As several forms of slavery continue to thrive in modern society, continuing the story of humanity with wisdom learned from the past can be done with any form of writing which relies upon critical thinking and objective analysis. 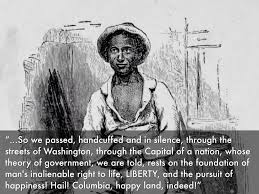