“American television has sustained an extremely active and nuanced engagement with the construction of history and has played a crucial role in the shaping of cultural memory.”

This closing line of Steve Anderson’s introduction to his article, “History TV and Popular Memory,” rang very true for me. Television in itself is a cultural and historical phenomenon, but the shows on television can do some wonderful things for viewers. As 21st Century American citizens, we understand television has become a staple in our culture, relaying both information and stories about past, present, and future. As a staple, television has introduced new ways to think about time and history that other media have not been able to before.

While some may claim that TV provides this information and story telling is “without context or opportunity for retention” and that because of this, it isn’t a solid source of historical memory, Anderson argues that television does provide opportunities for “historical reception, [or] what people remember of history, and the way it is made useful in their lives.” Shows about historical events as well as shows about the present provide means to understanding culture.

Anderson asserts that “memories acquire meaning in resonance with other historical constructs (images, narratives, politics, ideologies, etc.).” Television is given the opportunity to combine several (if not all) of these features he provides that allow us to construct and build upon memories. Even though some may counter that only “official” histories, written by historians, are the only “true” histories, even historians come from a biased position: “no historical ‘document’ […] may be considered naïve or free of its own historical consciousness.” Therefore, with television, viewers can make their own decisions about the history presented to them, putting themselves in that historian position of their own lives in regards to understanding culture.

Shows that focus on historical events can take several paths that create a “compelling form of ‘living history’” for viewers. These shows can, in fact, present interviews with historians debating and reflecting on the ideas being presented. These shows (I’m thinking along the lines of the History Channel, here) typically have experts in the fields presenting the information in a very factual, objective way. Reanimations of the events allow for this idea of “living history,” placing viewers in that time period visually, which immerses viewers into the history in a much different way than text alone could. While viewers may find these shows entertaining, their primary objective is to inform about historical events.

One of the categories of shows that Anderson does not address in his article is more modern shows that are set in the past but not connected to any one particular historical event. These shows visually represent the past but do not directly address historical moments during these times; they are typically meant to entertain rather than inform. For example, the shows I have in mind are those like Mad Men and The Goldbergs, which are set in the late 1950s/1960s and the 1980s, respectively. Historical events during these time periods are rarely directly discussed, and if they are, it is only in relation to the character’s lives, and not those of the American people in general.

Nonetheless, these shows provide viewers with a sense of “living history,” or the ability “to see and feel what it must have been like to be a part of history.” Yes, Mad Men is fictional, and The Goldbergs is semi-fictional (based on one character’s actual life), but they do provide accurate representations of history and culture at that time, despite the individualistic narratives being presented. Fashion, gender roles, family and work dynamics, political issues, ideologies, and more are all presented in the most accurate way possible to portray to readers a sense of realness in its place in time, a sense of accuracy that allows viewers to be part of that place and time despite the fictional (or semi-fictional) timelines/stories.

Surely you can’t tell me that these pictures don’t just scream 50s/60s and 80s culture. 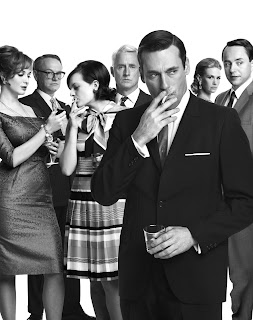 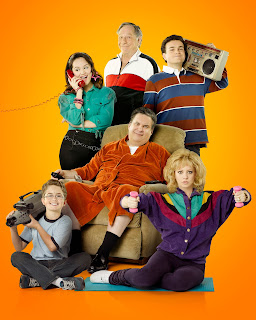 Even the modern shows about today’s culture, while they may not feel like “history” to us at this moment, will soon become part of our memories of our history. They’ll also become a way for future citizens/historians (really anyone with a memory, here) to come to an understanding of this “present,” our “now.” Let’s take Saturday Night Live as our example--one that's still in progress. Each week, SNL presents culture’s trends, issues, and hot-button topics, inadvertently capturing the fashions, ideologies, etc. that come with them. The show still airs, continuously framing American life in an often sarcastic and silly way, but framing it anyway in a way that most of us can come to understand. We can look back look back on the same format of show from over 30 years ago and see the same kinds of routines in a different time in American culture, which allows viewers to gain that better understanding of history and past. As culture changes, we can see the changes in the content of the shows but also its presentation, alluding to the culture in which it was made as well.

Of course, these three categories of shows that I have presented don’t even begin to touch the variety of ways in which television can affect viewer’s memories and create understandings of the past that affect their futures. Anderson presents more in his article as well. It seems we have only skimmed the surface of what television can do for constructing a sense of historical memory and identity.

I can think of way too many shows that have shaped by thoughts and understanding of the past and how it relates to my present. I’d love to hear the shows that have most influenced your thoughts about the past!
Posted by Unknown at 9:15 PM