Do you believe in fate? No, seriously. That’s not a rhetorical question. Answer it in the comments below. Are our futures mapped out for us? Or, at least, are some events in our lives mapped out for us? The events in Kate Atkinson’s Life After Life suggest perhaps. As the Doctor would say, there are certain moments that are “fixed points in time.” (Editing to say: Move video to 1:20. I couldn't figure out how to do that automatically through Blogger and just now realized it).

For Ursula, the main character, there are very few moments in her life that are fixed. Really, there is just one. Her death. It is practically guaranteed that Ursula will not live to die of old age. It seems that the universe is hell bent on killing her off at every opportunity. And yet, it gives Ursula the option for a redo every time she dies. Clearly, Ursula is not accomplishing something she is meant to accomplish.  In fact, the end of the novel implies she never does because it ends at the beginning­–on the day of Ursula’s birth, a slightly different version than the previous versions we have read. Is Ursula in a constant cycle of being reborn into her same life, with it playing out differently every time? I had hoped that, with Ursula killing Hitler, or even with her committing suicide, that the cycle would be broken. But it doesn’t. This cycle makes Ursula’s life feel very insignificant. No matter what she does, she ends up dying and starting all over.  The events change, but the outcome stays the same. Ursula’s mother, Sylvie, notes, “’Well we all get on…one way or another. And in the end we all arrive at the same place. I hardly see that it matters how we get there.’
“It seemed to Ursula that how you got there was the whole point” (Atkinson 252).

To Ursula, the events that happen leading up to her eventual death are the important parts. These are the parts not controlled by fate (to an extent) and the parts that Ursula has control over, which I think is part of the reason why how she gets to the end is so important to her. These are the moments she can change her own future as well as the futures of everyone around her.

Ursula lives constantly on “a fine line between living and dying,” as her mother says one day (Atkinson 18). There are moments in her life that she teeters on the edge of death, and often teeters off both ways. We witness her deaths and her merely close encounters with death.  We as the readers are the only ones truly aware of all the different scenarios being played out in Ursula’s life. Either fortunately or unfortunately for Ursula, she too is able to catch glimpses of these different lives, often feeling déjà vu or dread when she stumbles upon one of these teetering moments. Early on in the novel, we relive the same scene over and over again. Bridget gets sick and spreads her deathly sickness to Ursula who dies as a result. After a few times of these same deaths, Ursula wakes up, “listening to the dark, a wave of something horrible washed over her, a great dread, as if something truly treacherous were about to happen…Pamela mustn’t wake up. They mustn’t go downstairs. They mustn’t see Bridget. Ursula didn’t know why this was so, where this awful sense of dread came from” (Atkinson 91). Ursula at this point does not suspect she has lived multiple lives, but something in her stirs and warns her of impending doom. This feeling persists throughout her next several deaths until Ursula succeeds in changing the outcome of this situation and manages to keep everyone but Clarence alive.

Slowly but surely, Ursula begins to grow more aware of her multiple pasts and futures. On her sixteenth birthday, her father says, “‘Happy birthday, little bear. Your future’s all ahead of you.’ Ursula still harbored the feeling that some of her future was also behind her but she had learned not to voice such things” (Atkinson 175). The reader, of course, knows that in one of Ursula’s pasts, she manages to make it to 37 years old, only to be killed by leaking gas. Ursula’s many different lives intertwine and tangle with each other, leaving Ursula confused about what is real and what isn’t. The only things Ursula can sense are things that the reader has been exposed to chronologically. The book’s version of reincarnation, reincarnating into the same life instead of new ones, begs the question of whether or not these are actually past lives. Are the concurrent? These lives don’t technically exist anymore. Perhaps they are only arranged in this way in the book for the benefit of the readers, rather than for any sort of chronological purpose. How could these lives be in any chronological order, anyway? They are happening at the exact same time. Ursula is able to access concurrent memories from her other (not previous) lives and is able to use this knowledge to her advantage.
Or perhaps not always to her advantage, but to the advantage of others. There are times, like to save herself or prevent herself from being raped, that Ursula manages to change, but many of the differences in her lives revolve around the differences for other people. Sometimes she saves Nancy. Sometimes she doesn’t. Sometimes she is present at the apartment when the bomb explodes (which interestingly enough seems to be another fixed point in time) and she and others dies. Sometimes her presence changes things enough to save the lives of others (though not usually Fred Smith). Even Ursula’s affairs affect the lives of different people: Crighton, Ralph, Fred, and others. She has different friendships, sometimes due to slight changes in her hobbies as a child. Ursula seems to be the enactor and changer of others’ fates, even if she is only able to postpone her own fate for a while.

That is, until the timeline where Ursula ends up with her child Frieda in Germany during the bombings. Ursula chooses something she never had in other lives. She makes the decision to kill herself and her child. Atkinson writes, “[Ursula] had never chosen death over life before and as she was leaving she knew something had cracked and broke and the order of things had changed” (379). By being the direct cause of her own death, something she kept redoing normally in order to prevent her own death, Ursula seems to cause a crack in time and space (oh hello again Doctor Who reference) 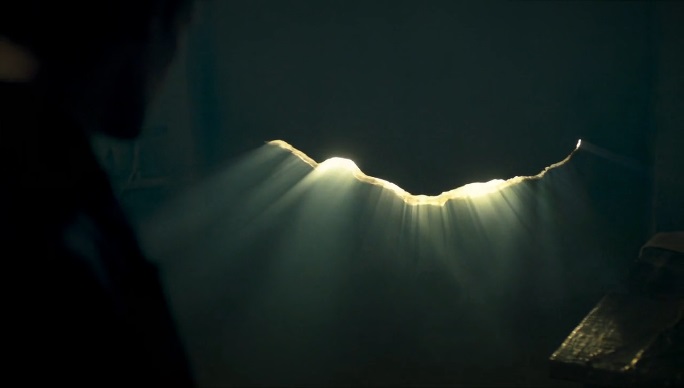 and in doing so, changes details in her others lives more directly than before. Dr. Kellet, Ursula’s therapist, had had a son, Guy, who had been lost at Arras a long time ago, or so he had in most of Ursula’s lives. Chronologically for the reader, after Ursula’s decision, suddenly Ursula notices a discrepancy. She knows Dr. Kellet had a son. But not in this timeline. “It seemed even the instability of time was not to be relied upon,” Ursula muses (Atkinson 497). When Nancy is found dead in the woods for the second time (the reader’s second time), Ursula again worries, “Something was riven, broken, a lightning fork cutting open a swollen sky” (Atkinson 504). Ursula’s lives begin to merge and collide stronger than they ever had. She feels dizzy one day and runs into the Egerton Gardens and hears the voice of her once ex-husband, Derek Oliphant:

She knew that voice. She didn’t know that voice. The past seemed to leak into the present, as if there were a fault somewhere. Or was it the future spilling into the past? Either way it was nightmarish, as if her inner dark landscape had become manifest. The inside become the outside. Time was out of joint, that was for certain. (505)

The cracks between Ursula’s lives are beginning to manifest in ways that jar Ursula out of living a single life. By taking the circumstances of her inevitable/fateful death into her own hands, Ursula upset the balance between her different lives.

The last thing I want to mention about how time works in this novel is about how Ursula does not seem to be the only one to sense the different possibilities and outcomes in these different lives. She is presented as the only one to re-experience and redo her life, but Atkinson hints that perhaps others are doing the same as well, if not all of the characters. The doctor getting there just in time with surgical scissors to cut the cord from around Ursula’s neck saves Ursula on the day of her birth. Sylvia remarks that they should get scissors to prepare in case this were to ever happen again. Of course, in that life, there is no way that will happen again. Yet  one of the the last “Snow” chapter we are left with, ends with Ursula being born the same way as usual, Bridget frantic, and Sylvia…”[holding] aloft her trophy–a pair of surgical scissors that gleamed in the lamplight. ‘One must be prepared,’ she muttered….
“Practice makes perfect” (Atkinson 520).
This moment seems to imply that there are others, including Sylvie, that can sense previous lives and be better prepared for it. Sylvie was able to unknowingly (or perhaps knowingly?) prepare for Ursula’s birth for an eventuality that she could not have foreseen without being subconsciously warned. Perhaps we are to be left with the idea that most people, if not everyone, are also trapped in these cyclical reincarnation loops, hoping to finally “get it right” without the satisfaction of knowing for sure if we ever will. Atkinson definitely implies in these last few chapters that Ursula’s experiences are not solitary and do extend further than explicitly described, turning it back to the reader, asking us if there are moments of déjà vu for us? Have we ever been able to sidestep experiences that could have been deadly?

Do you believe in fate?
Posted by Kristina Kastl at 10:52 PM