Time is a Goon

According to the Oxford Dictionaries goon means 1) informal “A silly, foolish, or eccentric person”; 2) North American “A bully or thug, especially one hired to terrorize or do away with opposition.” According to Bennie Salazar, “Time’s a goon” (332). And although in that context, Bennie is referring to the bully/thug definition when he asks Scotty, “You gonna let that goon push you around?” (332), in the novel A Visit from the Goon Squad, it is more the eccentric nature of time that is central to the plot, as well as to the reader’s understanding of the structure of the novel.

To best analyze the novel, one should probably create a series of linear timelines for the characters who are the center of more than one chapter: Bennie, Scotty, Sasha, Rhea, Lulu, and Alex (although the reader wouldn’t know to create one for Alex until the last chapter). Even then the linear timelines would require branches to account for the non-central characters, such as Stephanie, Lou, Dolly, and Jules, so that the timelines would begin to look like family trees without the blood relations or like diagrammed sentences, the diagrammed lives of the goon squad.

(The diagramming of Article 6 of the U. S. Constitution seemed apt in reference to the various illegalities committed by the goon squad, as well as being a particularly multi-layered sentence as I imagine the intersecting timelines of the various characters.)

However, as this novel was assigned over the spring break and my plans included multiple airplane rides, days at the beach, and drives to the ballpark, I chose to push back against the goon of time and just enjoy the nonlinearity of the novel. The only time that I felt bullied was the reference to 2008 being thirty-five years in the future (61) during chapter four, “Safari,” about Lou and his children. I was caught off guard because I hadn’t processed that the falling back through time of “Part A” had fallen so far to 1973. It wasn’t until I read that fact that I seriously reflected on the passage of time in the novel; I had been enjoying the eccentricity of the reverse timeline and the changing focus on characters, especially the six-degrees-of-separation aspect to the choice of which character to focus on with each new chapter. 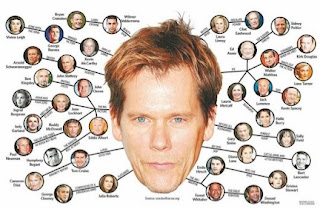 In fact I was more bothered by the lack of a Kevin Bacon character at the center of the novel than I was first by the regression of time in “Part A” and then the bouncing around in time of “Part B.” Having now finished the novel and reflecting on it, I would place Bennie Salazar at the center of the degrees of separation. (And, yes, I just spent an hour trying to create an accurate six degrees of separation for most of the goon squad.) 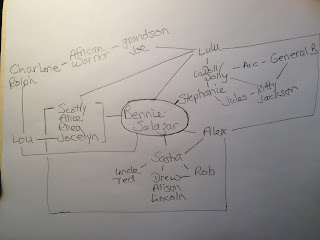 And yet, I don’t feel that the novel is about Bennie. As much as I wanted the novel to be about Sasha, and she probably has the most chapters about her, as well as the most mentions in other chapters, it is not about Sasha.

The novel is about time, and the passage of time. Ted attributes his wife’s spontaneity and desire to “make sure it’s always like this” to her feeling “the passage of time” (231). The novel serves as a wake up call to every reader; events are happening that you will never be involved in, connections are being made because of or in spite of you, and you will wake up solidified in a place much like Sasha in the opening chapter feeling both “mired in it and lucky to have it” (14). For most of us the jarring moment isn’t like Sasha’s when she “think[s] of herself as a glint in the memories Alex would struggle to organize a year or two from now: Where was that place with the bathtub? Who was that girl?” (14). Our jarring moments are more personal along the lines of “How did I get to this age?” or “When did my children/parents get old?”

Without being maudlin, you cannot prepare for those jarring moments. And they occur at random times, much like the events and memories in the novel occur in nonlinearity. My sons graduating high school did not jar; over the years, I have taken great pride in those moments that they adult (yes, I used it as a verb). In fact I am relieved when they prove that they can adult. The jarring moment this year with my older son when was he left from winter break, and I realized that he will never really return home again. This house may be his childhood home for the majority of his life, but he will most likely never live here full time ever again. I should be rejoicing that I could transform his bedroom into an office/library, but I have just chosen to close the door and leave it intact, almost shrine-like. I’m not ready to move forward. At least I’m not pilfering items like Sasha, right?

And then I encourage all of you (classmates, professor, any random reader) to spend a significant period of time, including overnights, with your parents as they age. In fact I suggest traveling with them. This spring break my parents traveled with my husband and me to Florida for spring training baseball games. My husband, our sons, and I have made this our routine spring break trip, but my parents, especially my baseball-loving mother, have only accompanied us once on the requisite Disney World trip. Which was thirteen years ago. When my parents were in their early 60s. I’ve noticed changes in their activities over the years; I have been well aware of most of their health issues. And I’ve made mental notes of little changes that no one has bothered to mention. But I usually see them for a few hours in their home or in mine, not in a location 1,021 miles from either of our homes for twenty-four hours per day. I was jarred all week. When had these changes taken place? And how did I not know?

Maybe time is a goon, a bully. It doesn’t terrorize us on a daily basis; rather, it’s the culmination of time that appears out of nowhere. It smacks us in the face to take away our opposition to growing older. And it is at that point that we reflect; we look back at our own good squads to see how we got here. To see if it’s been good or bad, or at least to see when it’s been good and when it’s been bad. But ultimately, we should learn from the novel that it’s more important to find a good squad that you fit in with, that makes you content. We should all be so lucky to end up with second chances like Bennie with Lupa and Ava or like Sasha with Drew and her children far away from New York City. But I hope for everyone reading this that you end up content like Alex with Rebecca and Cara Ann on the first go around. Find your goons and relish them.