The movie Jack directed by Francis Ford Coppola and starring Robin Williams in the title role was released in 1996, eight years after the release of Big starring Tom Hanks. Both movies deal with a young male protagonist who physically ages beyond his chronological age; however, while Josh Baskin in Big wishes to become older and magically ages twenty years overnight, Jack Powell in Jack is born with a medical condition that physically ages him four times faster than his chronological age. Big explores the desire to be older coupled with the belief that better times will occur at the next age milestone; Jack explores how to appreciate life since no one really knows how long he or she has to life it to the fullest.
Jack opens with Mr. Powell and a barely-showing pregnant Mrs. Powell attending an adult-version Halloween party. As the conga line circles the dance floor, Mrs. Powell’s belly looks more pregnant with each lap until she goes into labor suddenly pregnant with a full-term baby boy. The film cutely acknowledges the leap from reality to fantasy through Mrs. Powell’s costume: with her feet in the stirrups, Mrs. Powell is only visible from the knees down wearing striped stockings and red glittered high heels, much like the 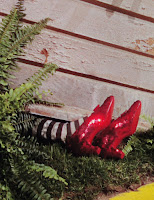 Wicked Witch of the East’s legs protruding from the Gale house in Oz. While Mrs. Powell is a loving mother and not a wicked witch, the image reminds the viewer that the Powell family is not in Kansas anymore (figuratively speaking).