Generational Visits from The Goon Squad 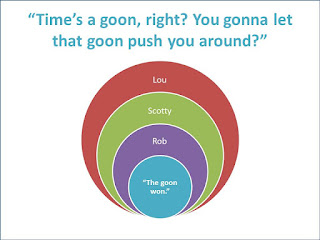 A Visit From the Goon Squad by Jennifer Egan plays out to be a visit not from particular people, but more from several generations at once. Within her novel, the reader gets to see different characters in different areas of their lives. Never once does the reader get the same narrative perspective from the same character, each one tells a different story from different times in their lives. Where the connection comes into play isn’t with a chronological order but rather how different lives are touched by different people. These people’s stories come and go at different times, we see different characters at different moments in their lives, and Egan does a great job of giving the reader a way to reflect on their own lives.


One of the characters that comes into play, and seems to be the centerfold of this narrative is Bennie Salazar. Bennie’s life is seen from different moments in time and he tends to tether all of the characters back to him in some way, shape, or form, no matter where the narrative may be at. Take for example the story of Lou. When we finally get to a point in time with just Lou, a safari in Africa, there are still tethers back to Bennie. Lou is introduced to the novel through his young girlfriend Jocelyn. Jocelyn is connected to Bennie as one of the punk rock kids of the 70’s and 80’s. The novel works as a web, with the center of it being Bennie’s life. No matter where a character is at in their storyline, in some way or form they have a connection to Bennie. 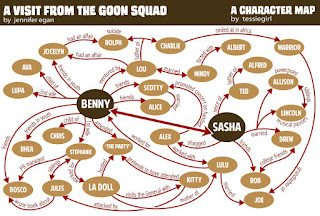 With this idea in mind, the phrase “time's a goon” could be a direct reference to Bennie himself, after all, if the reader sees the original group of friends connected to Bennie in the beginning as the “Goon Squad” referenced in the title, then it’s Bennie’s squad that it is referring to. Again, Bennie seems to be around, even if it’s just in spirit, for every narrative. When Lou’s story is told of his time on safari in Africa, the reader knows the age and what’s going on with Bennie. In an earlier chapter, the reader gets a view into Lou’s apartment. In there, the girl’s see a photo from the safari and given a time when it takes place. From there, the reader can figure out just when and where the rest of the crew is at. The same goes for other characters moving through the novel. When looking at Dolly’s story, she references when things went downhill for her, in particular her party. She gives a specific time and date, and also makes references to where the actress Kitty is at in her life. Both these instances have a direct tie back to Bennie. Bennie’s wife use to work for Dolly and his brother-in-law was the one that sexually assaulted Kitty. Both these instances in time allow for the reader to figure out where in time Bennie is again. Even if it wasn’t meant intentionally, Bennie is the central figure of the novel, the clock that the reader can use to put time in a chronological order for themselves.


Within this novel as well, Egan allows for the reader to see several generations at once and even makes a prediction of what is to come of future generations. We see the punk rock era and how young kids acted during the time. As the novel periodically moves forward, the reader gets glimpses of other generations. The character of Sasha, Drew, and Rob all show what the generation after them was like. They’re the younger group that follows after Bennie and his squad. By having them going through time in their important areas, Egan allows for the reader to see the effects of the older generation on the young. Again this is apparent with the character of LuLu. With her generation, and an eventual prediction of another baby boom in the future, things once again have changed. Unlike Bennie and his group, who were all about music, drugs, and hard living, LuLu’s group has significantly changed. This group, commentated on by Alex, doesn’t swear. They group up with the futuristic technology affecting their lives and have learned to live with it. In every sense, their generation has rejected the style of living that was seen by them growing up. Finally, we also get a look at the generation to come through Alex’s daughter Cara-Ann. With her generation, and many young other kids, growing up in a technology filled world, they seem to have the most control over what is popular and what happens. The tablets everyone carries is often used by children. They help influence what music is bought, what shows up on screen, and even the type of language that is going to be used in the future. Egan seems to even hint at the dumbing down of society based on way messaging works on these systems.

One other time related theme that was noticed is how the destruction of the past leads to a destruction of the future. In the beginning and through most of the novel, it feels as though destructive life tendencies play a major role not only on characters but the world itself. There seems to be a blatant disregard for the planet and people that would be considered “good” or “bad”. Take for example the story that Dolly is a part of. For her, she has lost everything is on the edge of being broke. Due to this, she takes a public relations job trying to make a dictator running a genocide to look good in public light. Despite the fact that she knows this is the wrong thing to do, it isn’t until Kitty is taken captive by the general that she finally decides it’s the wrong course of action. Again the commentary can be seen in Scotty’s chapter, when he is fishing in the river. He talks about how bad it’s polluted but doesn’t care. He goes and fishes everyday and even eats the fish, saying that the river isn’t as polluted as people believe. The blatant disregard that he has, and the others, leaves a strong comment on our current world. Finally, towards the end of the novel, we see where the world is at in regards to the destruction and pollution taking place. We have Sasha’s daughter talking about the desert she lives in. She goes on a walk with her father and thinks about how the golf courses were now all dried up and how lawns were gone. In their place is plenty of solar panels, be she notes, quite cleverly, that they really don’t make a difference and things are too far gone. Again we see this commentary with Alex. He makes subtle hints at the destruction of the world. How him and his family, among many others, go to a wall to peer at the sunset before it disappears. He also talks about how it’s winter in New York and the concert Scotty is playing is outdoors. He mentions how it’s a beautiful day, eighty-nine degrees, and also how the sun is setting earlier and earlier. Egan uses her play on time to show the damage that past generations have done on the future of other generations. 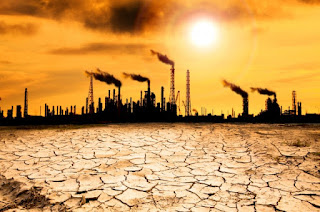