Confronting Death When Faced with the Fountain of Eternal Youth

Timelines intertwine in Darren Aronofsky’s third film The Fountain (2006), starring Hugh Jackman and Rachel Weisz. The story consists of three separate timelines–during the time of the Spanish conquistadors, the present day, and hundreds of years in the future. Hugh Jackman and Rachel Weisz play the main characters in each of the separate timelines, lending ambiguity as to how symbolic the audience is supposed to take the events. The Fountain is ultimately about the desire to live forever, but, more importantly, it centers around the natural human fear of death and what lies beyond it.

The Fountain aptly
begins with Genesis 3:24: “Therefore, the Lord God banished Adam and Eve from the Garden of Eden and placed a flaming sword to protect the tree of life.” The story then moves into one of the ends–the end of the conquistador timeline. Tomas (Jackman), a conquistador under the service of Queen Isabella (Weisz), finds the pyramid said to hold the fabled Fountain of Eternal Youth. As he reaches the summit, he is greeted by a Mayan priest. Tomas rushes at the priest, but the priest is too quick, and he stabs Tomas and beats him over the head with a torch.

Five minutes in, and we already have a quest for eternal life and a death! This is shaping up to be an adventure.

The story changes, and we see Tom (Jackman), a man who we find out is five centuries in the future, taking care of a tree and eating its bark. He seems troubled and keeps seeing visions of a girl. The girl turns out to be Izzi (Weisz), who is the wife of Tommy (Jackman), a scientist in the present who experiments on rhesus monkeys in order to find a cute for cancer. His primary goal is to find a cure for his wife because Izzi has cancer and has been steadily getting worse and worse. In a desperate attempt to find results, Tommy injects a monkey with a cancerous tumor with a compound created from a tree in Guatemala. Amazingly, the compound actually manages to reverse the monkey’s aging, although it seems to have no effect on the tumor. Emboldened and yet disheartened by these results, Tommy continues to use the compound to figure out a way to reduce tumors, much to the dismay of his research team, who want to instead focus on the reverse-aging effects of the compound.

Back at home, Tommy and Izzi sit outside on the roof and stargaze as Izzi points out a golden nebula and explains the myth of Xibalba, the Mayan underworld, formed from the head of the First Father at the beginning of the world. She remarks how it is amazing that, out of all the stars in the sky, the Mayans chose a dying nebula for their underworld. Izzi also lets Tommy look at her fictional book about the conquistadors, titled The Fountain (oh so meta).  It turns out that Izzi is writing a story about a conquistador named Tomas who is chosen by Queen Isabella to find the Fountain of Eternal Youth. Tommy falls asleep reading Izzi’s book, and when we wakes, he finds Izzi has gone. He manages to find her at the museum, where she looks at a Mayan exhibit and explains the Mayan creation myth. In the beginning, the First Father was cut up into small pieces. His body helped create the world, but his head became Xibalba, the Mayan underworld where all go to die.

As Izzi and Tommy talk about the exhibit, Izzi suddenly looks up to the sky and faints due to a seizure. Tommy rushes her to the hospital, almost inconsolable at the thought of losing her. In the hospital, Izzi finally wakes up, and she and Tommy discuss death. Izzi reveals that, when she fainted, she was not afraid. She is no longer afraid of death. Of course, that makes Tommy all the more scared, and so, again, he returns to his lab to double up on his experiments, trying to race the clock to find a cure for Izzi. One day in the hospital, Tommy visits and Izzi goes into cardiac arrest. The doctors force Tommy out of the room, and he meets his associate Dr. Guzetti in the hall. She explains that the monkeys have seen improvement. The tumors are shrinking. Tommy races back to Izzi’s room to find out if she is okay and tell her the good news. But it is too late.

At Izzi’s funeral, Tommy vows to find a cure to death, and put an end to dying forever.

Woven throughout the present day narrative is 16th century Spain, which may or may not be a part of Izzi’s novel. The Grand Inquisitor learns that Queen Isabella plans to search for the Tree of Life/Fountain of Eternal Youth. Enraged by this quest, he vilifies the Queen as labels her a heretic. This opposition only fuels Queen Isabella on, as she believes that finding the Fountain will restore Spain to its glory. She chooses Tomas to accompany a Franciscan priest, who has recently found a map on a Mayan dagger, to New Spain in order to find the Fountain. Queen Isabella promises Tomas that, should he find the Fountain, they shall live forever, and she shall be his Eve. She gives him a ring as a sign of her promise.

The quest drags on in the New World, and Tomas’ men start to give up and end up mutinying. Tomas ends the mutiny, but only ends up with two men left. The Franciscan priest is mortally wounded in the fight, but he manages to tell Tomas that they have finally found the pyramid. Reassured by this news, Tomas and his two men set off to the pyramid. At this point, we join back up with where the movie began, and we see Tomas slain again by the priest.

Flash forward to the future narrative, still intertwining throughout the other two timelines, where an astronaut named Tom is drifting toward the golden nebula that Izzi once pointed out as Xibalba. He travels in a large bubble with a tree that, when the bark is ingested, keeps Tom from aging. 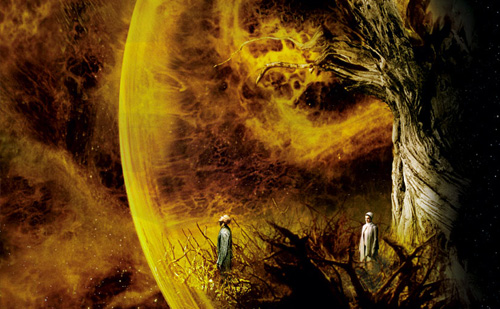 As Tom and the Tree of Life travel toward Xibalba, Tom is haunted by visions of Izzi, implying that Tom is Tommy from the present day, and he has found the secret to eternal life. As Tom tries to deal with these visions, the tree is slowly dying. Eventually, despite Tom’s best efforts, the tree dies, and Tom is finally left completely alone, except for the visions of Izzi. She compels him to finally finish her book, which, in the present day, she had stopped with one chapter left for Tommy to finish. As Izzi did long ago, Tommy finally accepts death, and finishes the story. Instead of the priest killing Tomas, Tom changes the ending so the priest believes Tomas is the First Father, and offers himself up for Tomas to kill, which Tomas does with little hesitation. Tomas then steps past into a garden and, finally, comes across the Tree of Life.

He uses the sap from the tree to heal his wound, and then drinks the sap himself. For a brief moment, all seems well. Then flowers start blooming from Tomas’ stomach, where he used the sap to heal himself. The flowers grow until they completely cover the now dead Tomas. Creation has sprung from death.

Back in the future, Tom passes through the nebula itself, and imagines Queen Isabella there with him. Suddenly he is wearing the ring Isabella gave to Tomas. Finally at peace, Tomas enters Xibalba, which explodes, sending Tomas raining over the tree. His remains revive the tree. Creation has sprung from death.

Our final time jump takes us to the present time, where Tommy is visiting Izzi’s grave. He plants a tree over her grave in an attempt to accept her death. Creation has sprung from death.

The Fountain is meant to make us think about our relationship with death. Tommy/Tom/Tomas represent our need to prolong our lives. It’s not so much that we want to live forever. We mostly fear death and what lies beyond. Throughout The Fountain, the characters rarely discuss what happens after they would find the cure for cancer/the Fountain of Eternal Youth. Instead, they focus on the act of staving off death itself. The terror of the unknown is universal and woven throughout time, as Aronofsky succeeds in showing in this film. He creates several significant moments and objects that reappear throughout each of the timelines. Bright light consistently surrounds of Weisz’ characters, showering her with a radiant glow, and seemingly promising life and happiness. The ring the Queen gives Tomas as a sign of her promise also reappears in the present as Tommy’s wedding ring and as a tattoo on Tom’s wedding ring finger, to permanently symbolize the promise of eternal life and the eternal bond between the couple throughout all of time and space.

Finally, the most important symbol of all is the Tree of Life. The film closely ties Izzi to the Tree, symbolizing Tommy’s/Tom’s purpose for life. He does his best to keep Izzi/the Tree alive, but ultimately fails. In his quest for eternal life for his love, he only prolongs his suffering, until he too must accept death, just as Izzi had long ago.

The Fountain is a story about love, life, spirituality, but most importantly, death. It is about our obsession with death itself (as I have noted in my post on the Apocalypse) and our dread of what comes next. The Mayans chose a dying nebula for their underworld. For them, they would experience what happens after what happens after death. They live again after death, but perhaps they must face death again. Perhaps death is something that must be continually faced. For, as The Fountain proves, there can be no creation without there first being death.
Posted by Kristina Kastl at 11:30 PM