I have to admit—I am a huge fan of Lost. However, my experience viewing the television series was quite different than that of fans watching as new episodes were still being aired.

The fans of the show that Lucy Bennett describes in her article, “Lost in Time,” were watching the show as new episodes were delivered weekly to an eager audience. However, because of the use of time incorporated within the show, I feel that watching the series as I did—after all episodes had been aired on Netflix—helped me to form a better understanding of the show itself.

Because of the way I was watching the series, I was able to pause, rewind, and rewatch parts that I may have misunderstood or were "lost" on me altogether, just as readers can do with written texts. Fans watching the series while it was still on television did not get this chance to go back and reconsider some parts like I did. Yet, as Bennett mentions, they did get the chance to participate in a more collaborative narrative experience online.

Perhaps the reason the show was so successful was because of the opportunities it provided for people to come together and discuss its narrative. Lost truly was (and still is, for those of you who have not watched it yet) a “puzzle to be solved,” which intrigues viewers in wholly unexpected ways. Instead of passively watching the series, viewers are forced to question and struggle with the concepts and complications presented by temporal play. Viewers are not allowed to just accept the story being told but forced to use “cognitive energy” in order to come to some kind of understanding of the narrative timeline.

It is this exact use of cognitive energy that I believe makes any narrative worth consuming, whether through written text, television, or any other narrative form. Time itself provides a unique tool to do just that. We expect good writers to keep us engaged with their narrative from beginning to end, and the temporal play within this particular series allows for this kind of deeper engagement.

When I say we expect certain things from good writers, it also applies to the writers of television series. As readers, we place faith in authors to deliver a narrative that interests us and brings us endings in creative and unexpected ways. Bennett also mentions this kind of faith that viewers were placing in the screenwriters of Lost while it aired; while viewers may have felt confused by or frustrated with the story, they still continued to expect these exact aspects that confused them in the first place, placing complete trust in the writers to continue to deliver interesting and engaging stories with a meaningful ending. 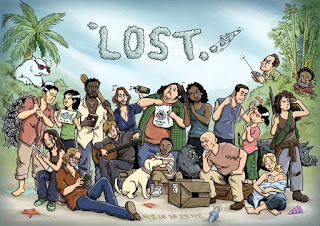 One interesting aspect of the show that Bennett also mentions is the use of props. Viewers applied this same kind of faith to not only the temporal play of the narrative but also the visual elements that appear in the show. Like in successful written texts, Lost seems to use every element of its medium to convey some kind of meaning. Just as readers expect every word in a text to be written for a purpose, so too do viewers expect that same kind of meaning from this particular show using all of the tools of its medium.

The idea that everything in the show means something adds another layer to the concept that the show is a puzzle that can be solved. Even the visual props are “clues” to solve the puzzle that time presents. Bennett provides a great example of this concept when she discusses the name of the funeral home on an episode in season three. The name of the funeral parlor is Hoffs/Drawlar, which, as one very engaged fan points out, is an anagram for flash forward. This visual clue, while extremely subtle and easy to miss, is an excellent example of the kinds of techniques that the show uses to create such a strong fan engagement that very much requires this cognitive energy Bennett addresses.

The temporal play within Lost is the foundation for this kind of viewer engagement. While reading Bennett’s article, I found myself frustrated with the fact that some viewers became frustrated with this particular flash forward, as mentioned of the episode in the preceding paragraph. I feel that any narrative enthusiast that enjoys cognitive engagement would have to strongly disagree with the viewers that believed the flash forward “solved the mystery” of the series.

Any intriguing narrative has the ability to provide several concepts and issues that can be discussed and “solved” rather than just one focus (getting off the island, in this case, as some viewers believed). While several novels have successfully provoked thoughts and beliefs about temporal play, Lost is a series that provides these same aspects successfully in a totally new medium. Any tour de force in narrative will disrupt learned conventions, as Bennett also mentions.

However, I think the real joy for viewers of this show in particular is the pleasure we receive “from asking more questions” rather than seeking any solid solution. Time is a concept that allows viewers to do just that. Lost fans, and fans of all decent narrative for that matter, in my oh-so-humble opinion, seek to engage in this type of complex discussion and questioning, and the show seems to encourage this same type of behavior for all narratives—yes, even those on television.

NEWS FLASH: Television doesn’t have to rot your brain!
Posted by Unknown at 9:28 PM